My Holiday / Manage my Holiday

Please use your 'My Holiday' to check your holiday details, pay balances and book extras.

Enter your details to retrieve your booking.

The login details you have provided are incorrect. Please try again.

Do you need help arranging your holiday?

Solo Fastnet, Round the Rock Race

A punishing solo yacht race in which more than half the fleet retired as it saw two gales hit the fleet during this six day nonstop solo race.

Ocean Elements were proud to sponsor the SORC Solo Round the Rock Race, in which our MD James Hardiman competed in the Ocean Elements boat Fluke III, a Jeanneau Sunfast 3200.

The race followed an iconic route from Cowes around the Fastnet Rock (6.5kms into The Atlantic Ocean, South West of Ireland’s Cape Clear Island) and back to Plymouth, taking competitors on a tough six day challenge across the notorious Celtic Sea. The race started off near Cowes in 28-30 kts of challenging conditions and encountered two gales and sea conditions that swamped many boats as they battled their way out of the Solent and through the Needles channel.

Out of the 43 starters, 24 retired, leaving 19 finishers of which our MD James Hardiman was one. The race attracted some of the most successful Corinthian short-handed sailors from France and the UK with some big names racing the event, some of whom have been winners of the OSTAR and TransQuadra trans-Atlantic races. 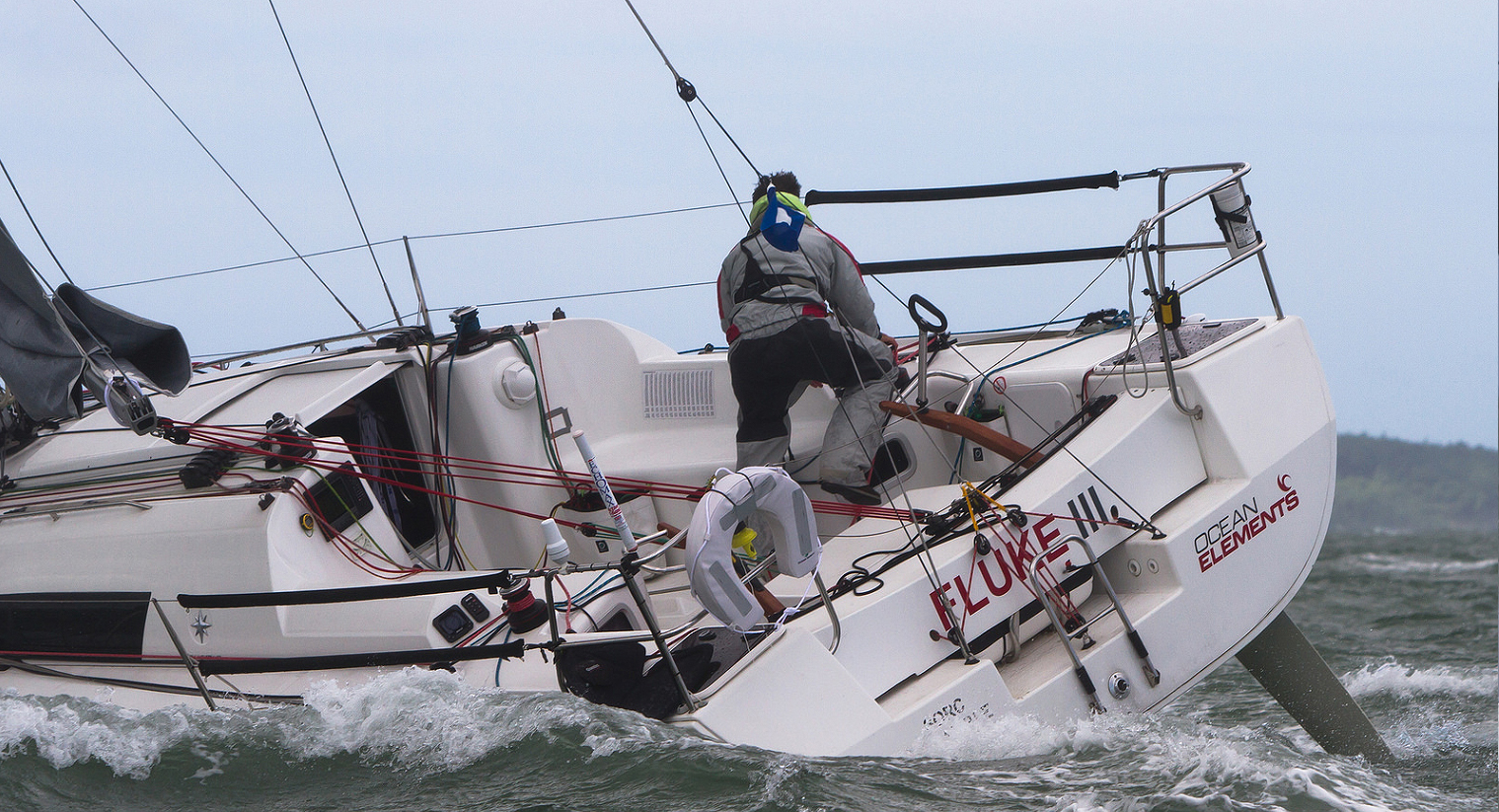 After the first day of gales, those of the fleet that remained intact were able to grab some short respite in a day of calm weather that followed. Boats were dried out and equipment was fixed on-the-go whilst yachts continued on their way to the Fastnet Rock. During this period many competitors had to retire due to a variety of reasons from injury, exhaustion and damage to boats; and some sensibly retired because of more forecast heavy weather that was due to hit the fleet in the Irish Sea on day 3.

Later on in the afternoon of Day 3 the winds began to increase as the fleet made its way out into the Celtic Sea with little or no easy-to-access port of refuge to seek shelter if things got too rough. To say the fleet were committed is an understatement.

Quote from our MD James Hardiman:

As if the first round of bad weather wasn’t punishing enough on the fleet, the gale that hit us on day 3 was super tough for the remaining competitors. It was utterly demoralising and the sailing conditions were some of the worst I’ve encountered, with seas as big as a house and breaking crests which forced Fluke (the boat) to be pushed almost flat over on her beam ends. I can only liken it to sailing in survival conditions where waves washed over me and swamped the boat regularly. The only consolation is that it wasn’t a deep low and lasted for (only!) 10 or so hours, but if you can imagine someone relentlessly chucking buckets of cold water at you for the whole night, then you’ll have some idea what it was like…

Fortunately Days 4,5 and 6 bought happier, more manageable sailing conditions to the fleet but skippers were tested until the end as the effects of sleep deprivation set in and mistakes were being made.

Managing my sleep was one of the hardest parts of the race. Many of those that retired would have done so through exhaustion. For the full 6 days of the race I managed to cycle my sleep in 15-20 minute periods through the night, giving me (on average) up to two hours sleep each night. Topping up with cat-naps through the day was enough for me to remain focussed – but I’m certainly paying it back in exhaustion now the race is over!... – James Hardiman

The remaining fleet finished in Plymouth throughout the day on Thursday 7th July under spinnaker and had to complete several gybes in the final run to the line which continued to test skippers right up until the end! 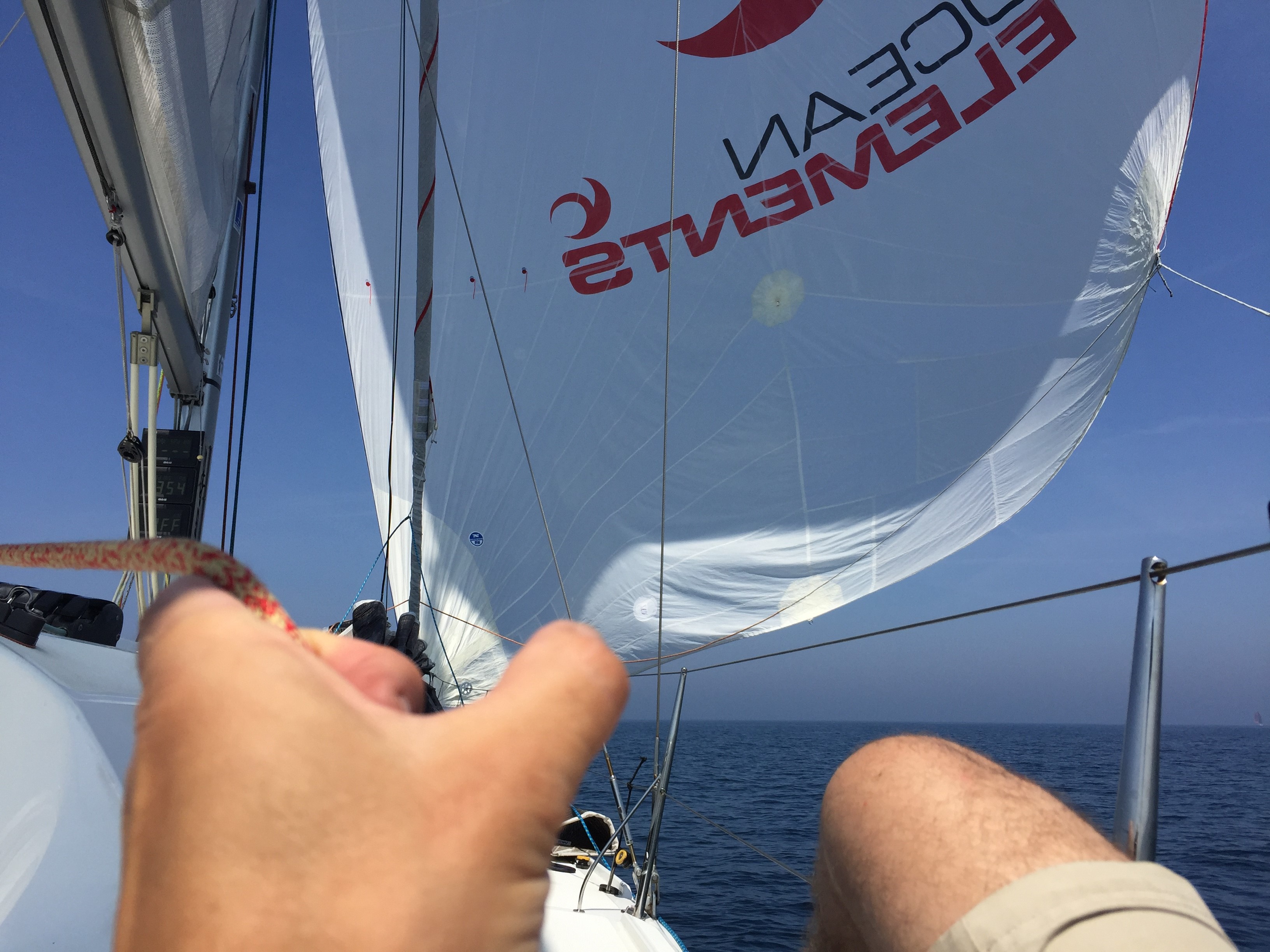 Congratulations to race winner and former OSTAR competitor Will Sayer on his Sigma 33 who won a holiday for two with Ocean Elements/Alpine Elements.

This race was always about more than simply getting round the course in the shortest possible time. It’s an adventure that instilled a palpable sense of achievement among all the skippers, irrespective of their final result. At the same time, old friendships were strengthened and many new ones forged, while many of those who had been forced to retire have a determination to complete the second edition of the race in 2018” – from Rupert Holmes